"Screen sharing is AWESOME! Easy to start or stop, easy to use!"

"Remote Screen control is DOUBLY AWESOME! This alone makes Brosix
a valuable tool for remote support of my Linux users!"

Dibl and I connected via Brosix’s local client and later via their browser interface. This a summary of what we discovered.

My laptop has Intel video and sound chips. Dible was running Natty as a VM guest OS.

I was able to send my sound and video to him. He could hear and see me. But, because he was running Natty as a guest OS, Brosix didn’t see Natty’s sound or video as being Intel chips, so while he could see and hear me I could neither see nor hear him.

AWESOME! (Apparently the Intel requirement is only for video and sound) Easy to start or stop, easy to use.

DOUBLY AWESOME! On the screen sharing mini dialog is a middle button offering the user a chance to convert screen sharing into remote control of his mouse and keyboard. It can work either way very easily. Dibl’s Brosix crashed while we were connected. He was able to get it back up so fast I couldn’t tell it had crashed. The connection seemed to be seamless, without interruption.

Dible and I took turns controlling the other’s computer remotely. Easy as pie. Very little delay. This alone makes Brosix a valuable tool for remote support of my Linux users. I am going to use Skype to talk them through downloading and unpacking Brosix, then adding a menu entry. After that I’ll use the remote access capability of Brosix to remove Skype from their box.

An aside: IF Microsoft’s past behavior is any guide, I suspect that they will continue to make improvements in the Windows version of Skype, perhaps less so for the Mac version, but will let the Linux version lag to the point that people will abandon it… all in an attempt to force them away from Linux and back to Windows. Bosix circumvents that ploy. Will Microsoft attempt to influence or buy Brosix to hinder its support of Linux and Mac? I suspect so.

It is typical of the genre. Seen one and you’ve seen them all.

I took a screen shot and sent it to him so file send and receive worked great, which is something Gmail’s Chat does not have.

It is only a chat tool. No other features are visible on the web page.

Quote from Brosix site: “Brosix Web Client leaves no traces of activity and no personal information on the computer. It employs the same high level encryption and security as other Brosix applications.”

It is great for chatting from a library. You still have to log into your Brosix account, which is free for personal use.

This is a brief summary of what Dibl and I discovered during our 30 minute experiment. We didn’t test everything, but we tested the important bits.

Brosix is more than capable of replacing Skype on Linux. In fact, IMO, it is better than Skype.

More case studies from our customers 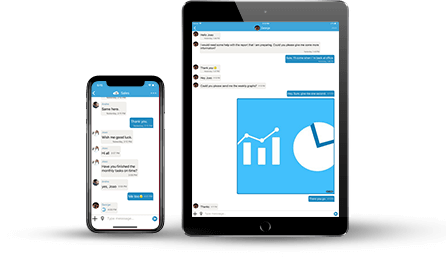